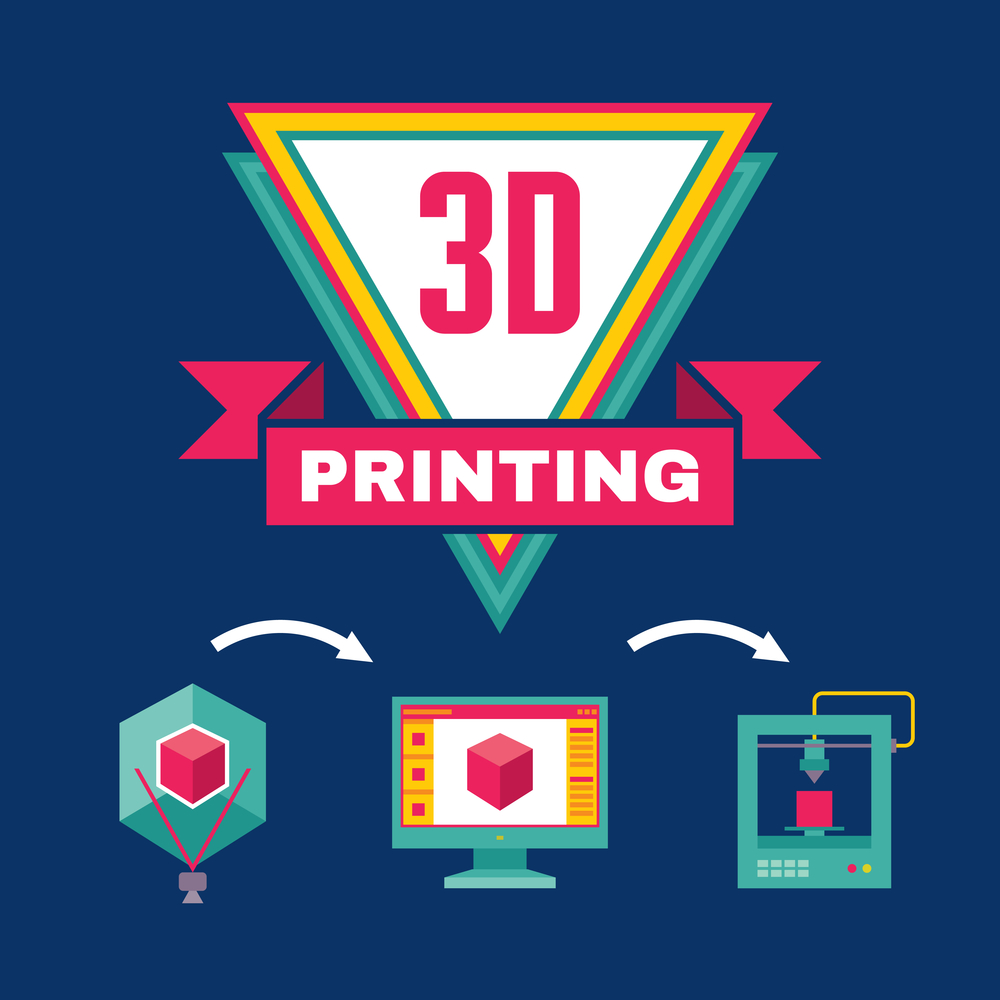 A few years ago, the advent of commercially available 3D printers made a big splash. Since then, 3D printing has become something of a novelty in many consumers’ minds, as the cost of materials, the hardware, and other factors kept it from going mainstream. But experts say 3D printing is now making huge leaps, and will likely change the landscape of design, manufacturing and logistics in coming years. Commonwealth Digital is proud to be on the forefront of this new technology– and to help our clients understand its amazing potential.

What Is 3D Printing?

3D printing involves making solid, three-dimensional objects from a digital file. These objects are created by adding material, layer by layer–that’s why some in the industry refer to the process as “additive manufacturing.” The final product can be made from a virtual design or a scan of existing material by means of a 3D scanner. Producers can design objects themselves using software like Blender, or download a pre-existing plan from websites such as Thingiverse, where users have uploaded thousands of designs. For now, most 3D printed products are made from thermoplastics, but advances are being made in 3D printing to use other materials such as metals, glass, ceramics and even food.

3D printing is still in its early stages but has the potential for major breakthroughs in both the short and long term. For now, it’s often used simply as an entertaining way of showing consumers how it all works (you may have seen the fun 3D printed figurine dolls available online). We think this is a great way to get started as it helps people understand what 3D printing is and how it works. Commonwealth often does complementary 3D portraits for clients and others who attend our office technology shows–they are lots of fun and help visitors understand the basics of this new technology.

What Is The History Of 3D Printing?

3D printing has its roots in the Rapid Prototyping Technology (a set of techniques that are used to quickly produce a scale model of physical parts) of the 1980s, but it has taken decades for it to get onto the radar screens of most businesses and consumers. Advancements were made throughout the 1990s, but it wasn’t until the early 2000s that 3D printing began to make big leaps. At the beginning of this century, 3D printing was still geared toward production of high value, complex parts and equipment in a very limited number of sectors due to the high cost of the hardware. However, things began move forward around a decade ago with the development of more office-friendly (and budget-friendly) 3D printers. In 2012, 3D printing took a big leap with breakthroughs in less expensive equipment which attracted more media attention to its practical applications.

How Is 3D Printing Being Used Today?

3D printing is already making important contributions, particularly in the fields of medicine, aerospace and manufacturing. The medical sector may be where it has received the most attention—where 3D printing of prosthetics and artificial body parts for transplants could drastically change the face of the modern medical field. These life-changing technologies are already making a big difference in medical practice, doctors and engineers say this is just the beginning.

3D printing is beginning to play a role in manufacturing, too. Just last month, New Balance launched the first running shoe with a 3D printed midsole. A partnership between a European engineering firm and an Arizona-based manufacturer recently led to the world’s first 3D printed car. This alternative method of manufacturing is being used on a small scale to make repair parts for appliances and other household objects, and is perfect for creating prototypes and models for builders, designers and architects.

Major aerospace companies have used 3D printing to source parts that are complex and hard to find—like high tech parts for rocket engines. In these cases, because the parts are so specific and intricate, they are generally less expensive to make using a 3D printer than with a traditional production process. The aerospace industry is truly an area where 3D printing has revolutionary potential.

What Does The Future Hold For 3D Printing?

Experts agree that 3D printing technology is likely to have a big impact on a number of fields in years and decades to come. We’ll see greater strides in the use of 3D technology in the automotive, aerospace, as well as the manufacturing and medical fields and beyond. We’ll likely see the development of so-called “micro-factories,” making everything from cars to appliances. For individuals and businesses, 3D printing will take on new importance in creating prototypes, models, and repair or replacement parts. Materials are expected to get less expensive, and 3D printers themselves will become less costly and even more user friendly as they become more efficient and practical.

3D printing is also expected to have a huge impact in developing countries where manufacturing capabilities are limited. Last year, humanitarian groups used 3D printing to repair pipes damaged in the devastating Nepal earthquake, and applications like this are certain to expand, even in the short term.

Commonwealth Digital, 3D Printing And You

Commonwealth Digital is excited to be a part of this emerging technology and to help our clients discover how they can use it in their own businesses.

Today, you might get a chuckle as we make your 3D portrait at one of our business expos. Down the road 3D printing just may become an integral part of your business, and Commonwealth is here to help you along the way.